Kansas Carries On In Augusta

Kansas brought their “Leftoverture 40th Anniversary” Tour to the Bell Auditorium on Wednesday evening. Kansas was anchored by two original members: drummer Phil Ehart and guitarist Rich Williams. Longtime bassist Billy Greer said they were going to perform an acoustic set and then “rock your face off.” And that’s exactly what they preceded to do.

As promised, the show started right at 7:30pm. The band came out to start the show with an acoustic set with “Reason To Be” and “All I Wanted 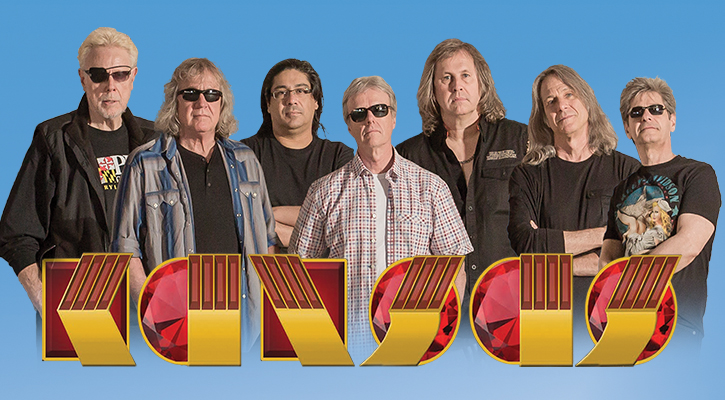 .” They continued the unplugged set with “Hold On” from the 1980 “Audio-Visions” album. They closed the set out with “Refugee,” which is a song from their newest album “The Prelude Implicit.” The song is about the current sex trafficking crisis going on.

Kansas came out for the electric set and played the epic songs of “Icarus II” and “Icarus (Borne On Wings Of Steel).”

Greer revealed that Kansas sound engineer Chad Singer was married in a church a few blocks away in downtown Augusta. He also mentioned that “Leftoverture Live & Beyond” concert LP will be released on November 3.

They featured the radio hits of “Point Of Know Return” and the acoustic “Dust In The Wind.” They closed the next section off with a string of songs from “The Prelude Implicit” – “Rhythm In The Spirit,” “The Voyage Of Eight Eighteen” and “Section 60.” “Section 60” is a song about Arlington National Cemetery. Near the end of the song, a soldier walked out on stage with a folded American flag.

It was now time for the six time multi-platinum album “Leftoverture” to be performed in its entirety. The first track was the all-time classic “Carry On Wayward Son.” They featured a radio tuning to different stations and then the intro of the studio version of “Carry On Wayward Son” started. The live band then kicked in and rocked our faces off.

Lead singer Ronnie Platt was spot on all night long. He is just as good as the original lead singer. Platt hit all of the notes perfectly.

During “What’s On My Mind,” violinist David Ragsdale got a chance to perform a magnificent guitar solo. Kansas continued to crank out all of the tracks of “Leftoverture.” It was a treat to hear the classic album performed in its entirety. They closed the set with “Magnum Opus”

After a brief break, Kansas came back out and performed “Portrait (He Knew)” for the encore.

Kansas brought a great 2.5 hour show to Augusta. They featured some new material, deep cuts and the classics. They only omitted the fan favorite “People Of The South Wind.” Kansas showcased their progressive rock with precision. It was a treat to finally get to see this band come to the area.