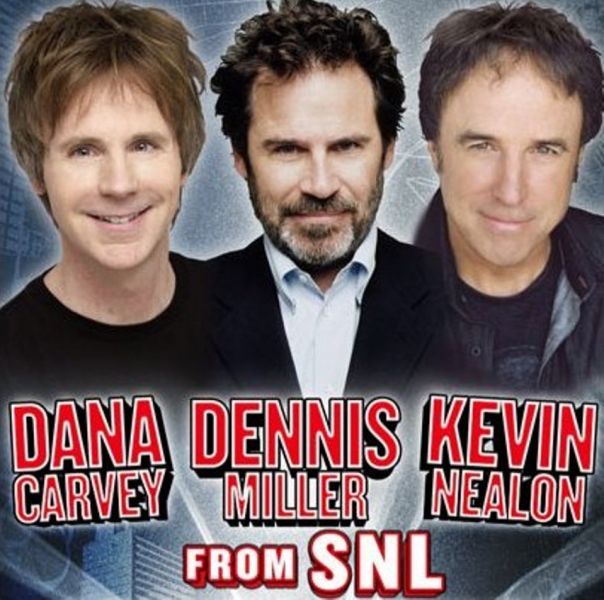 Laughs were plentiful as each comedian got a 25-minute set in front of the crowd in the half house setup. It was also a common theme for each comedian to make fun of the recent name change at the Bon Secours Wellness Arena, formerly the Bi-Lo Center.

Nealon was out first and went into his conversational style of comedy. He said it was great to be in Greenville, and “There’s a lot to do here, you can go to Charlotte, you can go to Atlanta, everything’s going on here.” He then spoke about visiting Liberty Bridge at Falls Park earlier in the day.

Nealon later went on to feature Mr. Subliminal, one of his SNL characters, where he would make a statement and then say an ironic comment under his breath. One of his biggest reactions from the crowd came when he told a tale about the time he “crop-dusted” Jack Nicholson.

He ended his set by speaking about delivering his baby, and as he walked off the stage, he yelled “Go Clemson!”

Carvey was out next with all of his wacky characters and impressions. He hit the stage full of energy and immediately made fun of the name change at the venue, “As George Bush Sr. would say, ‘Well, what’s Bi-Lo, buy low, sell high, went with the wellness area, don’t know where that whole wellness thing comes from, wellness over here, wellness over there, wellness.’”

He featured The Church Lady, Carvey’s SNL character, in a story where he performed at a Microsoft convention and made fun of the almighty Bill Gates.

In the middle of his bit about Cheney, a heckler yelled something, and he immediately switched over to Perot to drown that person out. His quick thinking received an eruption from the engaged crowd.

He spoke about parenthood and told a story about his son wanting to drive nine hours just to ski for 20 minutes.

He said a few lines as Garth, of Wayne’s World fame, and then pulled out his acoustic guitar. He then went on to talk about musicians’ guitar playing techniques and performed ‘Santa Claus Is Coming To Town” as a typical Neil Young song to close his set out.

Miller was last out and also ranted about the name change, “Nice to be here, what is this called? Koos Koos? Because they are out of names for places.” He continued on with his simile driven set that involved ranting on different subjects.

He spoke about how rapidly technology is evolving and said, “I remembered thinking that the other day as I found myself lining my parrot’s cage with Kindles.”

Miller touched on how California is struggling and how Finland was named the best country in the world by “Newsweek Magazine.” He said it used to be cool to have tattoos and piercings, but some people have taken it to an extreme lately.

He made fun of rock bands getting older by saying the Van Halen tour should be called the “Rip Van Halen Tour,” Air Supply means “air supply literally,” and the Rolling Stones: “moss has gathered.”

Miller said he was raised Catholic, and the first time he went into confessional he said, “You first.” Later on, he even took at jab at South Carolina’s former governor, Mark Sanford.

He continued and touched on subjects that included man breasts, erectile dysfunction medications, Obamacare and global warming to close out his set.

It was now time for the Q&A portion of the show, with Carvey, Miller and Nealon on the same stage. Fans got to ask questions on the microphone, and the questions ranged from political opinions to backstage SNL information.

Every time someone would ask multiple questions or requests, Carvey would jokingly say in public address voice, “Please go to section 8 for arena removal.”

Miller said, “This is Gamecock country,” and he heard some boos. Then Carvey jumped in and said it was Clemson territory.

The highlight of the Q&A had to be when Carvey and Nealon brought back the classic skit “Hans and Franz.”

Carvey had the most energy and kept the crowd engaged during his time on the stage. Miller was all around with his jokes and sometimes was over the head of the audience with his historical references. Nealon was a solid low-key performer.

There should have been a local or unknown comedian opening the show. That would have entertained and warmed up the audience. It was great for a new and fresh event to come to town. Hopefully more shows of this caliber make it to the Upstate.