Ted Nugent is back with an all new album titled “Shutup&Jam!”  And that’s exactly what the Motor City Madman does, shuts up and jams. It’s his first new studio album in seven years and first with Derek St. Holmes on vocals and rhythm guitar since 1995.

It is stacked from top to bottom with high-energy rock and roll. It kicks off 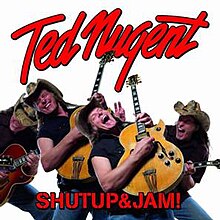 with the title track “Shutup&Jam!” With the first track, you can tell that Uncle Ted is in top form. Sammy Hagar shares lead vocals with Nugent on the hard-rocking “She’s Gone.” St. Holmes makes his triumphant return to lead vocals with “Everything Matters.”

There are two tracks of “Never Stop Believing,” a rock and a blues version. Nugent’s patriotism is evident through the whole album.

Some songs may seem corny, but don’t all of Nugent’s songs seem like that? Speaking of corny, the surprise of the album has to be the catchy “I Love My BBQ.” It will easily get stuck in your head after the first listen with its catchy rhyming lyrics and riffs.

This new Nugent album is filled with classic-sounding songs, everything from hard rock to the blues. If you are a fan of Nugent and/or classic rock, then you will really enjoy “Shutup&Jam!”