On December 18, Paul McCartney releases his 18th solo, studio album, McCartney III.  Recorded during Sir Paul’s covid “rockdown”, this latest foray into his ever-increasing music canon is not being reviewed here – that comes later.  Instead, we’re taking a look at the monolithic release of this album, and the various formats and packages that are available.

Ignoring for the moment that 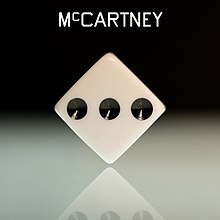 this release and its various configurations are designed as an unadulterated attempt to garner a UK #1 album debut, how does a casual listener, fan or completist-collector decide what to go after?  It all depends on your level of fandom, how rabid a collector you may be, or simply, how deep your pockets are.

For the vinyl junkies, there is no less than 12 different LP configurations currently available to be chased and obtained.  For the one-and-done LP collector / occasional fan, the black vinyl is readily available and can be purchased almost anywhere that vinyl is sold.  But this is where it becomes a challenge for the serious completist collector.

Third Man records first McCartney III release is a black and yellow disc limited to 333 copies worldwide.  Immediately selling out, this record is manufactured partly from ground up vinyl copies of McCartney I & II and repressed into the disc that makes up McCartney III.  Current prices on Ebay list this vinyl for sale between $3700 – $5000 per copy.

Spotify premium listeners were offered the chance to purchase a coke bottle colored, clear vinyl LP, limited to 3000 worldwide.  Current prices between $200-$700 on ebay and Amazon.

Target stores exclusive version is on green vinyl, limited to 3000 copies.  Current prices list this for sale on the net around $200 per copy.

McCartney III was issued on pink vinyl as an exclusive for Newberry Comics.  This release was limited to 1500 in the United States and 1500 in the UK, and currently lists between $150-$250 on the internet.

Select indie record stores offered the pre-sale, white vinyl LP, limited to 3000.  Prices on the internet range between $65 and $100.

Universal (udiscovermusic) came late to the pre-sale game, issuing an orange vinyl LP that is currently selling for $50-$150.

Barnes and Noble offered a blue vinyl LP, which their internet site, as of this writing, still shows as available for pre-order at $29.99.  Internet sellers list this LP between $50-$150 currently.

And finally, there is the standard black vinyl LP, which retails for $26.49 and available from several different retailers, both brick and mortar and via internet sites.

With the exception of the standard black vinyl release and (potentially) the blue Barnes and Noble exclusive, all of the other colors were sold in pre-sale and have to be acquired via the secondary market.

Confused yet?  If not, let’s take a look at the various CD issues.  While these are more readily available, most of the following are only available via Paul McCartney’s website.

Releases available through multiple outlets are the standard issue CD, and the McCartney III Songbook CD version.  You can easily find them on retailers like Amazon and retail between $13 and $26 depending on which version you prefer.

For the hardcore collector it becomes challenging.  There are four different deluxe boxed sets (Yellow, Red, White and Blue), each featuring a color coordinated package that includes a baseball cap, t-shirt, covid mask and dice – along with a companion cd that contains ONE additional bonus track that is specific to the color of the set.  If you’re chasing all of the bonus tracks and prefer deluxe boxed sets you have to purchase all four, at $85 each.  If you’re keeping score, all the hats, t-shirts and masks have different logos or sayings making them unique to their designated color.  So you have to purchase all four if you’re completing the set.

It get’s better.  If you don’t want all the merch in the deluxe boxed sets there are four color coordinated deluxe CD sets with a booklet and color coordinated cover and compact disc.  Each disc has ONE bonus track exclusive to that color, so, once again you have to buy all four discs to get all four bonus tracks.  They retail for $14.33 at paulmccartney.com.

But there’s more – each of the four, colored discs are also issued in a “Secret Demo Edition”, mini-jacket CD.  Only available at paulmccartney.com, they retail for $7.33 each.  Once again, you have to buy all four versions of this configuration to get all four of the bonus tracks.  You get the album and ONE bonus track.

To escape the multiple format trap and still acquire the bonus tracks, simply shop websites that deal in Japanese import CD’s.  You can find the pre-order for McCartney III from Japan for around $30 plus shipping.  These discs contain the original album tracks AND ALL FOUR bonus tracks on a single disc, plus if you find the Deluxe edition, there is also a bonus 2021 calendar issued with that CD.  Don’t want to deal with ordering from overseas, look to Ebay and you’ll find that disc available from multiple sellers.

Finally, for no apparent reason other than to have a fifth color cover version, Target stores are selling an exclusive, Green cover version of McCartney III.  There’s no bonus music on the release, and the only difference is the pretty green dice on the cover along with the Target exclusive sticker. $13.99 retail at stores, available December 18.

Adding insult to injury, the songbook that is bundled with one of the CD packages is available as a stand- alone purchase from Barnes and Noble for $19.99.

Finally, if you wanted to get every format, every configuration of McCartney III it would cost you around $6200.

Good luck to those of you intent on being the ultimate McCartney III collector – I wish you well in your quest.

Finally, I’m going out a limb just a bit, but I’d bet you can count on a Super Deluxe, boxed set with even more tracks being offered in early 2021, as McCartney himself has said that he’d recorded more than 25 songs during “rockdown” in 2020.  Looks like you’ll have to buy everything – again!