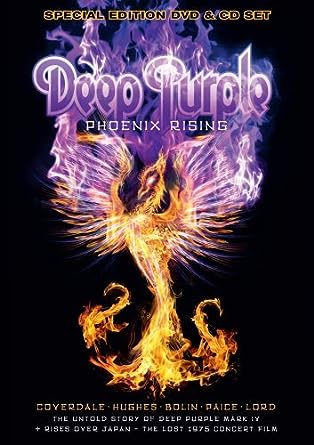 There are extensive new interviews with Jon Lord and Glenn Hughes. It is nice to hear their point-of-view on the band breaking up and finding new musicians to fill the open spots.

Ian Gillian (vocals) and Roger Glover (bass) were out of the band, but the band carried on throughout all of the turmoil.

A young and upcoming David Coverdale came into the band and shared vocal duties with Hughes. They helped create the 1974 albums “Burn” and “Stormbringer.”

Guitarist Ritchie Blackmore then left and they got Tommy Bolin, who helped create the “Come Taste The Band” album in 1975. When the band split up in 1976, Bolin was dead of a heroin overdose just a few months later.

Archival interviews are also included with Bolin, Coverdale and Pace.

A never-before-seen 30 minute concert is also included from their 1976 Japan tour which includes “Burn,” “Getting Tighter,” “Love Child,” “Smoke On The Water,” “Lazy,” “Homeward Strut,” “You Keep On Moving” and “Stormbringer.”

If you are a fan of the entire catalog of Deep Purple, then this is a must have. It is not their most popular line-up, but it is quite entertaining to learn about the last years of this Deep Purple lineup.