This Deep Purple with Orchestra concert was filmed in the summer of 2011. 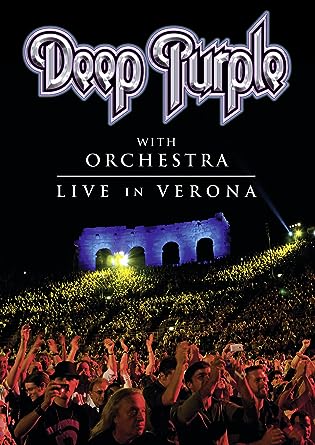 It took place in Verona, Italy at a historic Roman amphitheatre. Deep Purple featured their classics and some newer stuff.

Deep Purple originally started the trend for a rock band playing with a full scale orchestra in 1969. This time it is not as unique since it has been done so many times already by other bands. In this DVD, the orchestra is never too overpowering in the mix. They tend to add depth to the overall sound of the main players in Deep Purple.

The orchestra starts up with a short intro, and then Deep Purple comes out and starts “Highway Star.” They keep on trucking with “Hard Lovin’ Man” and “Maybe I’m A Leo.”

Ian Gillian proves he can still hit the high notes during his screaming parts. He might have lost a step, but he still sounds as good as ever. Keyboardist Don Airey held his own during the show. He channels the late Jon Lord, especially during his keyboard solo later in the set.

As usual, Steve Morse is a monster on the guitar all night long. (Read our exclusive interview with Morse HERE.) Bassist Roger Glover and drummer Ian Paice both provide a steady rhythmic foundation. They both had a chance to solo later on during the bonus tracks.

They close out the main set with “Perfect Stangers,” “Space Truckin’” and the one and only “Smoke On The Water.” The encores “Hush” and “Black Night” can be found under the Bonus section of the DVD menu.

Deep Purple proves that they still have “it” and are on mission – rocking the masses. They show no signs of slowing down any time soon. This DVD shows the current lineup of Deep Purple at their best. Eagle Vision continues to release great Deep Purple audio and video, and this is just another great example of that.