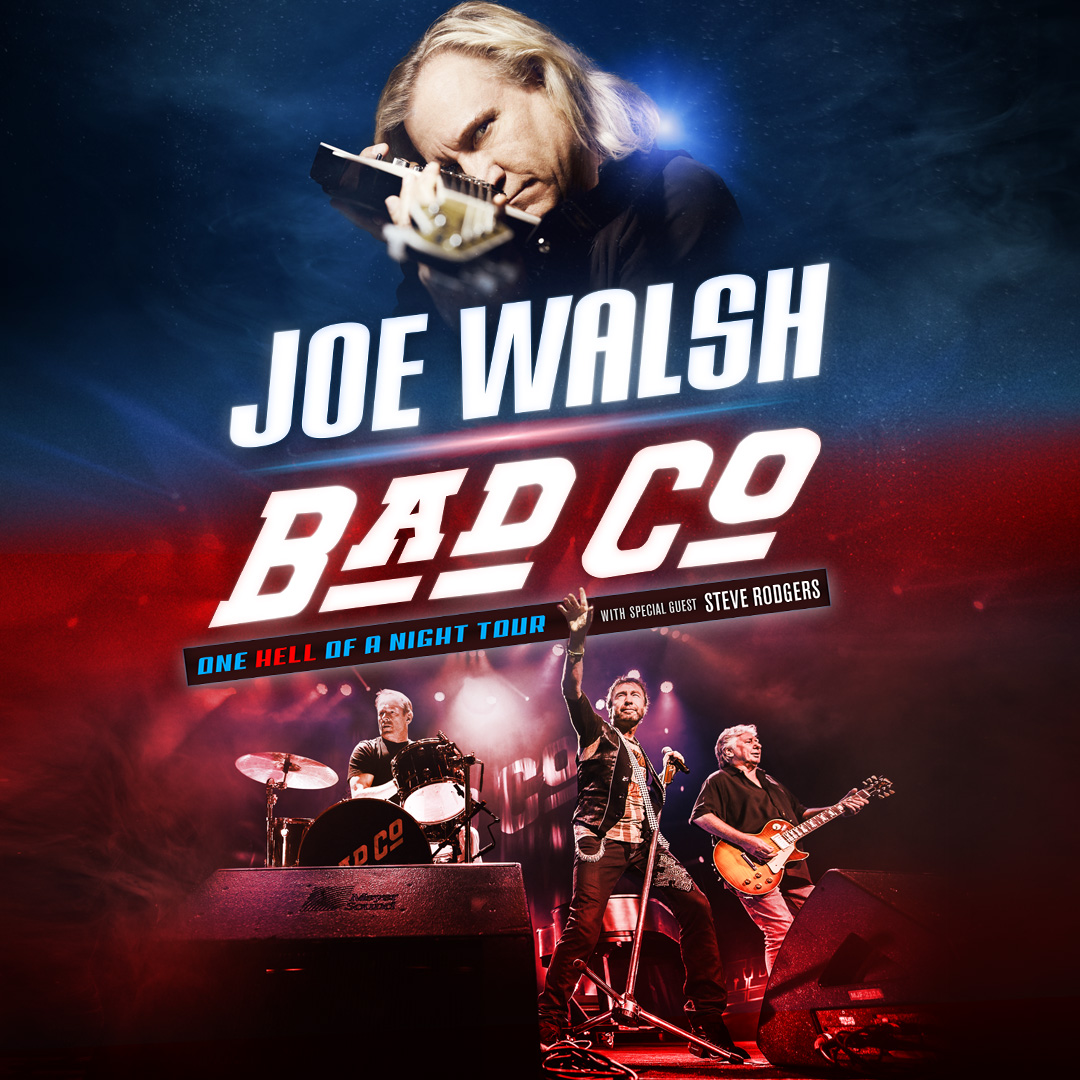 25 Shows Kicking Off On May 9th In Dallas, TX

Joe Walsh and Bad Company (Paul Rodgers, Mick Ralphs, Simon Kirke) announce their ‘One Hell Of A Night’ tour which begins in Dallas, Texas on May 12 and ends in Nashville TN on July 3rd. As co-headliners they will rotate the headlining spot each show. As for who will headline in what city Walsh playfully quipped: “I told Paul, if it’s a long bus ride I go first!”

“I had always hoped that we would do something together and so here we are 30 years later finally touring together, Bad Company lead singer Paul Rodgers commented. “It has taken us this long so I wouldn’t miss this. Unless you want to wait 30 more years for our next tour in 2046!!! There is only one Joe Walsh, he is such a unique person and an uber talented singer, songwriter and musician.”

“I have a huge amount of respect for Paul of course and the band and we get along great,” added Walsh. “Paul and I agreed it would be a hell of an evening of music, one that will be memorable for everyone who comes, and memorable for us, and that’s important in this day and age.”

“Getting back on stage with Mick and Paul is always a thrill for me,” added Bad Company drummer Simon Kirke. “And knowing that I get to see Joe Walsh every night makes it that much better…”

The tour will also include a special VIP ticket package for sale. This is something both co-headliners are really excited about. “We wanted to open it up, meet our fans and give back something special to as many people as possible who have been supporting both our bands all these years,” said Walsh.

As for set lists this really will be “One Hell Of A Night” and just to name a few you of course you can expect songs like: “Rocky Mountain Way,” “Walk Away,” “Life’s Been Good To Me So Far,” “Funk 49,” “Life In The Fast Lane,” from Joe and “Shooting Star,” “Feel Like Makin Love,” “Bad Company,” “Can’t Get Enough of Your Love,” “Rock ‘n’ Roll Fantasy,” from Bad Company plus many more.

Performing with Joe Walsh will be some of his backing band members from his record-setting solo Walsh Tour 2015, including Joe Vitale, his Barnstorm bandmate on drums and adding Chad Cromwell on drums; Waddy Wachtel on guitar; Larry Young on bass and Jimmy Wallace on keyboards. Leslie Fuller, Connie Jackson, Windy Wagner and Rickey Washington will be background singers and Clayton Janes on samples.

Bad Company will be making some announcements in the coming weeks about several new projects they have in the works including a classic live album release.


_________
Tickets for the ‘One Hell Of A Night’ tour go on sale to the general public March 11 and 12th. Joe Walsh Fan Club members will have access to an exclusive VIP Package pre-sale beginning Tuesday, March 8 at 10am local time. Fan club pre-sale access for concert tickets will begin on Wednesday, March 9 at 10am local time. Fan Club members should watch their emails for details.

Visit the Events Section for a full list of tour dates and on sale details.