3 Doors Down and Collective Soul with Soul Asylum

The Rock & Roll Express Tour finally stopped at the railway station known as the Heritage Park Amphitheatre in Simpsonville, SC on Saturday night. It featured the co-headliners of 3 Doors Down and Collective Soul with special guest Soul Asylum.

Soul Asylum came out first to warm up the already warm crowd. Frontman Dave Priner had on white sunglasses to help block out the direct light from the setting sun.

Of course their 30-minute set was anchored by the 1992 hit “Runaway Train.” Through the set, Priner had playful conversations with the drummer and bass player. 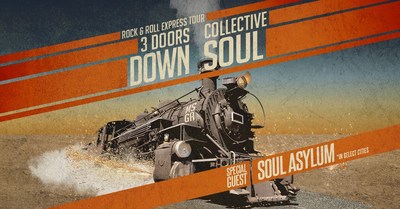 For their last song, roadies came out and sprayed the band with silly string on the riffing “April Fool.” Priner jokingly said the bands following them will have a “hard time topping our production today.”

The stage was set for Collective Soul as their hypnotic circle logo was prominently displayed. The band came out with “Now’s The Time” and “Over Me.” Ed Roland was wearing a white Soul Asylum T-shirt. The energetic frontman ran around getting the crowd pumped up by throwing up peace signs throughout their set.

Roland sat behind the piano to play the intro for the classic “Shine.” He then jumped up and continued being a hype man by saying, “How are you doing South Carolina? Let’s have some fun!” The crowd got to sing along with the “Ohhh – Heaven, let your light shine down” lyrics.

They kept the guitars distorted for “Heavy.” Lead guitarist Jesse Triplett got an extended solo during “Better Now.”

A 12-string acoustic guitar was brought out to Roland as he began funky cords for “Precious Declaration.” He would keep that guitar out for the majority of the remaining set.

Snow was shown on the video screens as they began 1995’s “December.”

They featured a couple newer songs in the middle of the set: “Right As Rain” and “Observation Of Thought.”  The somber “The World I Know” followed.

Roland revealed that “Gel” was the first song that they ever recorded as a band. After asking permission from security, Roland invited fans to come down near the edge of the stage. Before the song, he said that everyone needs to “listen, learn and love” so they all could “gel.”

Things got really heavy for “Where The River Flows.”

During band intros, Roland gave his brother Dean, rhythm guitarist, a hug.  Roland proudly said to the capacity crowd, “You people are the reason we love the South!”

The mellow “Run” closed out the set. Roland strummed his guitar as they all exited the stage.

3 Doors Down came out last with a large plume of smoke (or steam from a locomotive) for “Duck And Run” and “Time Of My Life.” Members frequently ran up the stairs, behind the video screen attached to the drums, to perform high above the crowd.

Singer Brad Arnold, wearing a black ball cap, asked everyone to sing along for “It’s Not My Time.” Throughout the night, he addressed the crowd as “my friends.”

They soldiered on with “Let Me Go” and “Going Down In Flames.” Arnold continued to prance around the stage and hit every note.

They took it down a notch with 2001’s “Be Like That.” Hardcore fans in the audience sang along with every song.

They did perform “In America,” a cover of the Charlie Daniels classic. 3 Doors Down did put on a patriotic display from the images on the video screen to the mic stands on stage that were draped with American flags.

Drummer Greg Upchurch really got to pound the skins on “Behind Those Eyes.”

Coming to the end of the set, they pulled out a couple of their biggest hits starting with “Loser.” And the smash “Kryptonite,” that included a little reggae portion and the amazing guitar solo by Chet Roberts. Arnold ended the song with an extended high note.

Back for the encore, and they closed the show out with “Here Without You” and the rocking “When I’m Gone,” which included another breathtaking solo by Roberts.

It was a very large crowd at the outdoor venue on Saturday night. Everyone enjoyed a dose of low humidly and a hint of coolness – rare for this time of year. This tour is chugging along with a perfect blend of rock and roll.  You have the raw harder rock with Collective Soul and the alternative rock of 3 Doors down. And don’t forget about the jamming of Soul Asylum. This tour continues to run full steam ahead.