Stevie Nicks And The Pretenders Are The Gold Standard In Columbia

The Pretenders brought an action packed hour long set to the fans eager to see some live music performed at its best.

The Pretenders, led by Chrissie Hynde, came out and immediately jumped into “Alone,” off of their new album also titled “Alone.” This is their first new record since 2008’s “Break Up The Concrete.” 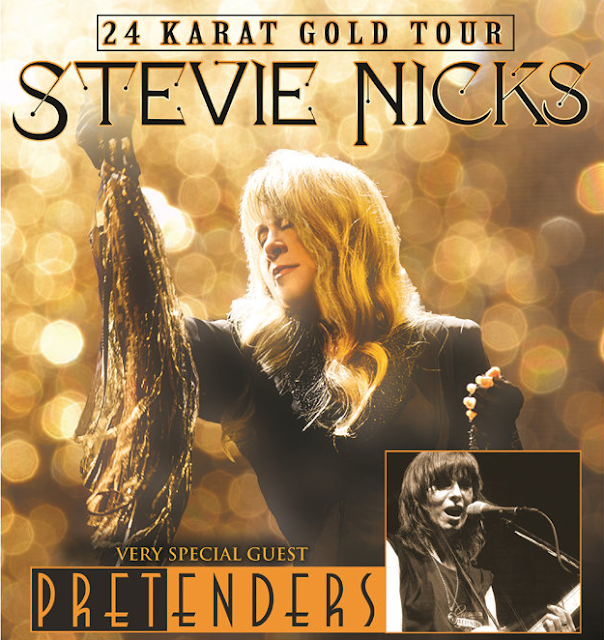 shirt. The crowd went nuts when she did that.

They kept the newer and deeper cut songs flowing with “Gotta Wait,” “Message Of Love” and “Private Life.”

The arena erupted when they heard the opening chords to the massive hit ““Back On The Chain Gang.”

Hynde got to showcase her vocal range with the emotional “Hymn To Her” and “I’ll Stand By You.” She also had new blondish hair, away from her traditional dark look. She looked stunning – we will not mention her age because she looks way younger.

She mentioned that their new song, “Holy Commotion,” is big overseas at the moment. It had the signature classic Pretenders sound. Other countries know their good music, while the U.S. doesn’t recognize new music by classic artists – which is sad.

Hynde got to show off her diverse musical talents by pulling out the harmonica during the fast-paced “Middle Of The Road.” She also played rhythm guitar all night long.

Hynde mentioned that the next song was about her hometown in Ohio. The bass driven “My City Was Gone” had everybody on their feet dancing.

“Brass In Pocket” closed out the set while Hynde let random audience members in the front row singalong with her mic.

Founding members Hynde and drummer Martin Chambers keep the unique sound of The Pretenders on the road. The Pretenders put on one rocking show. They thoroughly warmed the show up for Stevie Nicks. They might have even been too rocking to open up a mellow Stevie Nicks show.

The enchanted one, the lady everyone came to see was up next. Stevie Nicks’ band came out and started “Gold And Braid.” Nicks then appeared from behind the drum riser, and the place went crazy to see her, the one and only her. She was wearing her signature stage attire and had her microphone stand covered in hanging ribbons.

After the intro song, Nicks gave a preview of what’s to come that evening. She said after the most recent Fleetwood Mac tour, she changed up the setlist for her run of solo shows. She added, “I was just going to go out and do some songs that I wanted to do. It’s a brave new world when you get to be my age. You can actually do what you want.”

One of the highlights of the night had to be “Stop Draggin’ My Heart Around.” Nicks spoke about how important Tom Petty was in helping launch her solo career. Before going into the song, Nicks repeated “Thank you God for Tom Petty” several times, jokingly. Hynde walked out to accompany Nicks to harmonize, while Nicks’ longtime guitarist, Waddy Wachtel, sang the Petty parts. It was an amazing sight to see two legendary front ladies singing with each other. They really looked like they were having a good time during the performance. They embraced before Hynde walked off of the stage.

Nicks performed “Outside The Rain” and then transitioned into the Fleetwood Mac classic “Dreams.”

Nicks made the evening extra special by making the arena show feel more like an intimate venue. She frequently told stories about the production of her songs and behind the scene details. The storyteller approach made the night extraordinary.

After “Bella Donna,” Nicks brought it to attention that she was wearing the original cape from the back of the “Bella Donna” album. She mentioned that it cost a lot to make, but it has held up over the years.

The Twilight inspired “Moonlight (A Vampire’s Dream)” had an extended piano intro. A snowy moonlit ocean could be seen on the projector screen as Nicks reappeared wearing a white fur coat.

The synthesizer was cranked up for her solo classic “Stand Back.” She then said she would play one of her oldest song called “Crying In The Night,” from the Buckingham Nicks era.

Nicks paid tribute to her friend Prince on several different occasions. She mentioned how “Stand Back” was kind of inspired by Prince’s “Little Red Corvette.” Later, she flashed his image during “Edge Of Seventeen” – hence the doves.

She closed the set out with Fleetwood Mac’s “Gold Dust Woman” and an extended version of “Edge Of Seventeen.” Nicks said was very appreciative to the fans being so supportive of her song choices.

It was time for the encore. Nicks mentioned that every single concert she has ever performed has included the next song, “Rhiannon.” Nicks and the band performed the Fleetwood Mac classic with precision.

She told a story about originally writing the next song for Waylon Jennings, but had to take the song back after Jennings broke up with Jessi Colter. Eventually Nicks and Don Henley, her then boyfriend, recorded “Leather And Lace.” She harmonized it with her backup singers to close out the show.

Stevie Nicks put on a splendid show in Columbia. It’s rare that Columbia brings in acts of this caliber. Plus, it was on a Saturday night, which made the evening even more special. Nicks is a workhorse in the music business – juggling Fleetwood Mac and her solo career. It is impressive how big of a cult following she has.