from Charlie Daniels, Members of The Allman Brothers Band, The Outlaws, 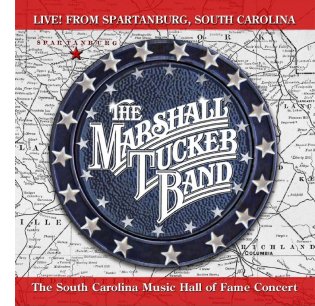 NASHVILLE, Tenn. (May 28, 2013) – Southern Rock icons THE MARSHALL TUCKER BAND (MTB) have gone into the vault and emerged with never-before-heard live concert recordings from their 1995 South Carolina Music Hall of Fame induction.

LIVE! FROM SPARTANBURG, SOUTH CAROLINA is available for purchase today, May 28, 2013, exclusively from Shout! Factory.

“The day this concert was recorded was a very big day for Marshall Tucker,” says MTB lead singer and founding member Doug Gray.  “Fans have waited a long time for this live recording with so many of our musical friends.”

On the album, fans can expect unreleased live versions of MTB classics including, “Can’t You See,” “Heard It In A Love Song,” “Fire On The Mountain” and “24 Hours At A Time.”

For additional information on The Marshall Tucker Band, visit www.marshalltuckerband.com.

5.  Searchin’ For A Rainbow

6.  Fire On The Mountain