The Midwest Express Rolls into the Southeast

The Midwest Rock-N-Roll Express Tour made a stop at the Verizon Wireless Amphitheatre in Charlotte, NC on Thursday night. Ted Nugent, REO Speedwagon and Styx were in town to put on a show of good old fashioned American rock and roll. 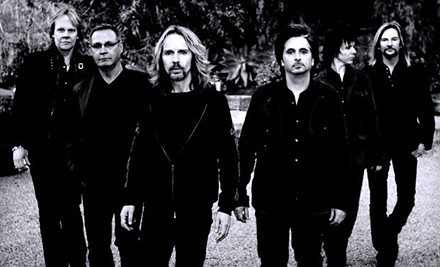 Nugent came out screaming to the crowd and immediately went into “Wango Tango.” The Nugent band was very loud and in-your-face.

Nugent asked “where were his 2nd Amendment brothers and sisters at?” And the crowd went wild. He also gave a shout out to all of the hunters and fisherman in the audience.

He said he was going to play some “love” songs. He then started a tongue-in-cheek love song called “Wang Dang Sweet Poontang.”

He saved his two biggest hits for last, “Cat Scratch Fever” and “Stranglehold.”

His set only lasted 45 minutes, but they had the energy to play longer. A lot of the fans were disappointed that the set was that short.

REO Speedwagon was up next on stage with a selection of their greatest hits. They came out with “Don’t Let Him Go,” and quickly transitioned into “Take It On the Run.”

They came prepared with their massive radio hits and a few deeper cuts.

Kevin Cronin, lead singer, said that they had some love songs to perform, unlike the Nugent kind. And the crowd erupted in laughter. They then went into “Keep Pushin.’”

After a few softer tunes, Cronin came up to the microphone and said it was time to “stop playing around,” and they were going to dive into their classic rock catalog.

They finished up their set with “Time For Me to Fly,” “Back on the Road Again” and “Roll with the Changes.”

It was time for the encore. After a standing ovation, they returned onto the stage.

They started out with “Keep On Loving You.” And for the final song the Moog Synthesizer was cranked up for “Ridin’ the Storm Out.” They closed out the show in rocking style.

Styx was up last to close out the show. They entered the stage and quickly cranked up “Blue Collar Man.” You could tell they were ready to rock and weren’t going to be putting on an opera show.

They then went into “The Grand Illusion” and “Too Much Time On My Hands.” They were spot-on with their songs compared to the studio recordings.

Even the Dennis DeYoung sounding keyboard player, Lawrence Gowan, was great and very energetic. He was spectacular, especially during “Lady.”

Tommy Shaw and James “JY” Young were monsters on guitar throughout the entire night.

Even Chuck Panozzo, original bassist, made a guest appearance on a couple songs.

They ended their set with a string of classics like “Fooling Yourself” and the hard rocking “Miss America,” sang by Young. They closed out the set with one of their biggest hits, “Come Sail Away.”

Styx then came back out for the encore while red, white and blue confetti shot out of a cannon from the rafters.

You could tell they were having a good time, and Shaw even let a fan in the front row strum his guitar.

They ended their encore with “Rockin’ the Paradise” and “Renegade.”

If was nice to see a tour package like the Midwest Rock-N-Roll Express Tour. Nugent, REO Speedwagon and Styx all pulled out their greatest hits. It was a very good rocking evening.