WARNING: If you are a hardcore Tom Johnston fan, this is not for you. And if you are an overall Doobie Brothers fan, you will enjoy it.

This concert film is with the Michael McDonald led Doobie Brothers. 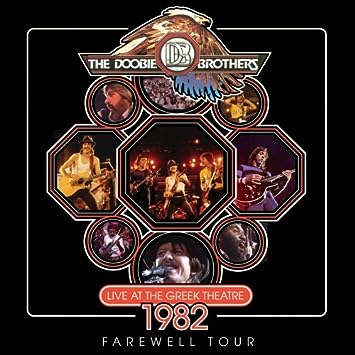 It was originally recorded in 1982 as part of their Farewell Tour at the Greek Theatre in Los Angeles. There were accounts that all of the band members were burnt out and needed time off. So they decided to “end” the band.

They came out to “Listen To The Music” and went back and forth between older Johnston songs and newer McDonald songs. During the Johnston songs, Patrick Simmons or another band member would fill in on vocals.

They played all of the hits from throughout the years and constantly kept the tempo up.

They should have brought Johnston out from the beginning. That would have made sort of like a super band performance. But he was kept in the back until the encore when all of the former members came out on the stage.

Johnston finally came out for the encore with “China Grove” and “Listen To The Music,” the second time they played that song that evening.

The only difference between the CD and DVD is that the CD left off the solo Michael McDonald tune “I Keep Forgettin” and Simmons’ solo song “Out On The Streets.”

This DVD recaptures the energy that the Doobie Brothers had when they were riding into the sunset. But just like many other acts, they were back full time six years later and are still going strong to this day.