“HISTORY OF THE EAGLES” TOUR RETURNS TO THE U.S. FOR SPRING -SUMMER 2015 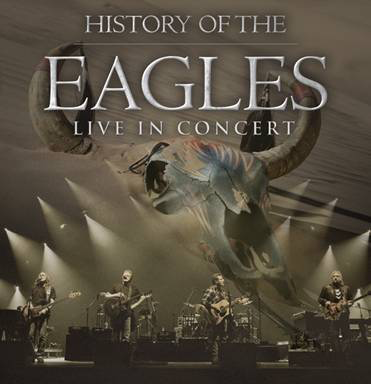 The Eagles have added late spring and summer 2015 concerts to the “History of the Eagles” tour beginning May 19 in Austin, Texas at the Frank Erwin Center with concerts scheduled through July 29 in Bossier City, LA at the CenturyLink Center. The tour, which kicked off July 6, 2013 following the release of the band’s acclaimed, top-selling documentary of the same name, features classic Eagles’ songs spanning their entire career, including some that have never been performed live. A limited number of VIP Ticket Packages will be available and may include Premium Seats, Pre-Show Party, Exclusive Merchandise & more!

Tickets go on sale to the general public beginning Saturday, March 21 at 10 AM local time for the following concerts: Oklahoma City, OK on May 20; El Paso, TX on May 22; Billings, MT on June 2; Sioux Falls, SD on June 4; Hartford, CT on July 15; Atlantic City, NJ on July 17; Buffalo, NY on July 18; Dayton, OH on July 22; Lexington, KY on July 25; and Bossier City, LA on July 29. Tickets for the Green Bay, WI concert on June 7 go on sale at 11 AM. Advanced tickets will go on sale to Monday, March 16 at 10 AM through Thursday, March 19 at 10 PM. Advanced tickets for the Atlantic City concert on July 17 will go on sale to American Express® Cardmembers beginning March 16 at 12 PM.

Tickets go on sale to the general public for the concert in Austin, TX on May 19 beginning Friday, March 27 at 10 AM local time. Advanced tickets will go on sale to American Express® Cardmembers beginning 10 AM on Monday, March 23 through 10 PM on Thursday, March 26 at 10 PM.