SLAYER announces THE FINAL CAMPAIGN, THE LAST LEG OF ITS FAREWELL WORLD TOUR. Primus, Ministry, and Philip H. Anselmo & The Illegals will support on all dates.

On Saturday, November 2, 2019, Slayer – Tom Araya/bass and vocals, Kerry King/guitars, Gary Holt/guitars, and Paul Bostaph/drums – will set off on The Final Campaign, the seventh and final leg of its farewell world tour. This last hurrah will start at the ExploreAsheville Arena in Asheville, NC, and see the band taking its goodbye bow at the Los Angeles Forum on Saturday, November 30. Accompanying Slayer for this last ride are Primus, Ministry and Philip H. Anselmo & the Illegals performing a vulgar display of Pantera, who will support on all dates.

Tickets go on sale this Friday, July 12 at 10AM local; limited VIP packages will be available. Log on to www.slayer.net for all ticketing and package details.

Slayer’s Final World Tour began on May 10, 2018 with the band’s intention to play as many places as possible, to make it easy for the fans to see one last Slayer show and say goodbye. By the time the 18-month trek wraps on November 30, the band will have completed seven tour legs plus a series of one-off major summer festivals, performing more than 140 shows in 30-countries and 40 U.S. states.

Slayer’s Final World Tour has been a wild ride. Three bus drivers, four truck drivers, and a crew of 32 have traveled all over the world to set the stage for this farewell. At most shows, Slayer’s pyro expert set off 160 pounds of propane and 10 liters of 99% isopropyl alcohol, prompting the Phoenix New Times reviewer to comment on the “eyebrow-singeing pyrotechnics that could be felt even 10 rows behind the pit.” In Toronto, one diehard fan was ejected from the concert before Slayer took the stage, so he jumped into Lake Ontario (that surrounds the Budweiser Arena) and swam back to the venue. The Tampa Bay Times’ Jay Cridlin wrote, “Beginning with the throttling opener ‘Repentless,’ Slayer tore through their set like a flaming cigarette boat across the river Styx, charring up a vicious circle pit by the stage,” and Detroit’s Gary Graff noted in his Oakland Press review the “10,000 headbangers who skipped the ‘Game of Thrones’ finale to pay homage to the pioneering quartet.” “The sheer physicality of their show was something to behold and was yet another indication that while the band may be calling it a career, they are going out on top, playing at their absolute best,” wrote Andy Lindquist for the SF Sonic, and Guy D’Astolfo with the Youngtown Vindicator ended his review with this: “After the final note, Tom Araya stood alone, scanning the crowd…forging a mental imprint of the moment. After a minute or two, he went to the microphone and said, ‘I’m going to miss you guys.’ Then he exited and the lights went up.”

Confirmed dates for the final leg of Slayer’s Final World Tour, The Final Campaign are as follows: 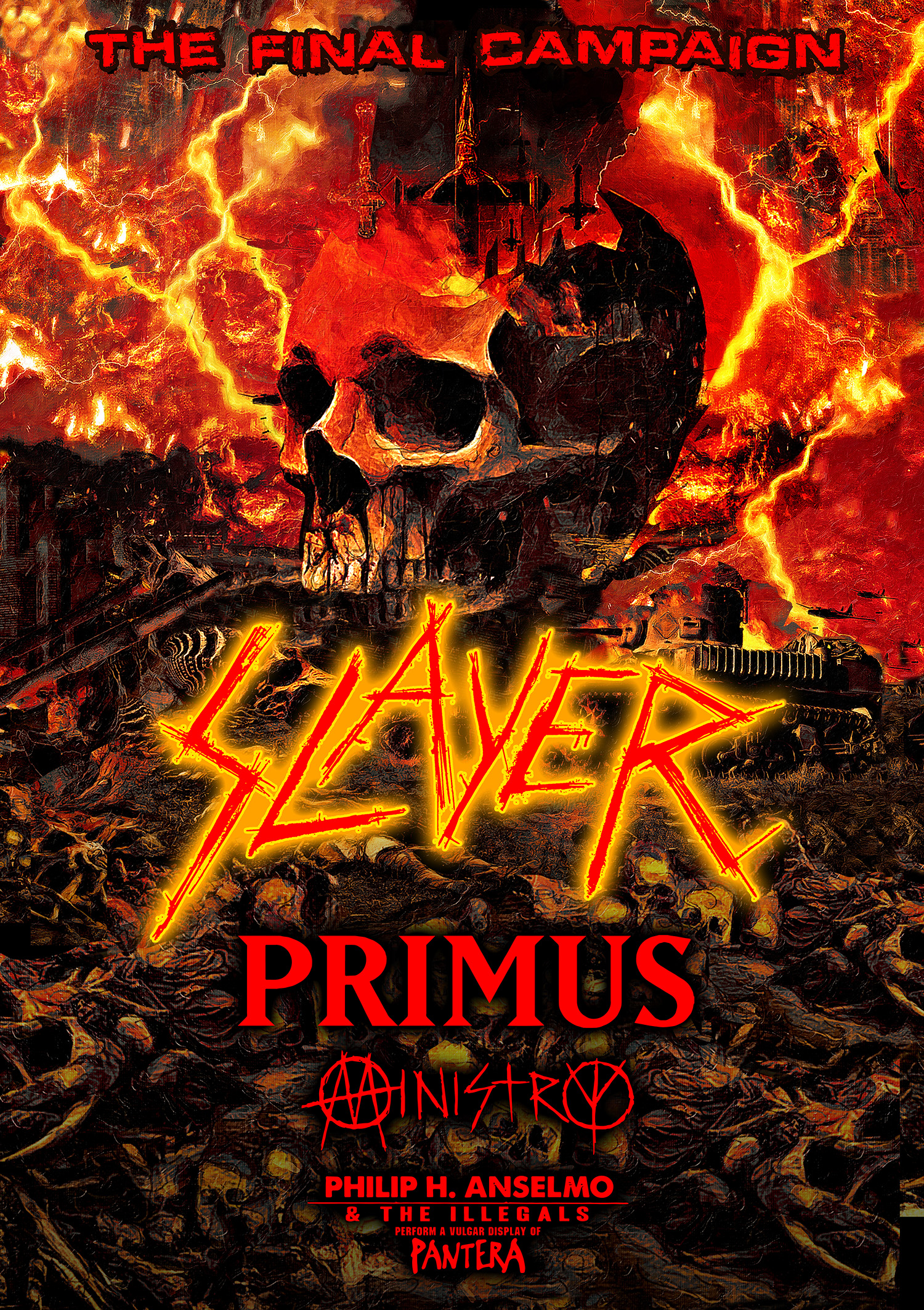